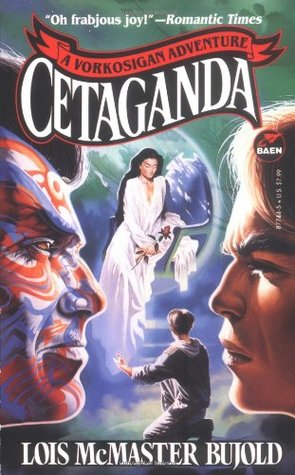 I re-read this one for I believe the third time. Miles Vorkosigan untangles terrible interstellar political machinations, this time without a fleet of mercenaries. Just with his cousin Ivan.

You probably could jump into the series here, but I’m not sure if I’d recommend Cetaganda as your first Vorkosigan book. You probably ought to read at least one earlier one, if for no other reason than to get a picture of what everyone thinks of the Cetagandandans. They’re portrayed (by their enemies) as pretty evil – “practicing eugenics with plasma torches.” But of course 24-7 evil wouldn’t work to run an interstellar empire. They must have family squabbles and career aspirations just like everyone else.

Bujold extends enormous compassion to her series’s main bad guys. There’s this one guy in particular, a horrible space-ubermensch genetically engineered to conquer planets, but all he really wants is for you to like these perfumes he’s distilled. He worked really hard on them. And of course the science, politics, and psychology all rings true. A damn fun book!

This entry was posted in Blog and tagged Book Review. Bookmark the permalink.