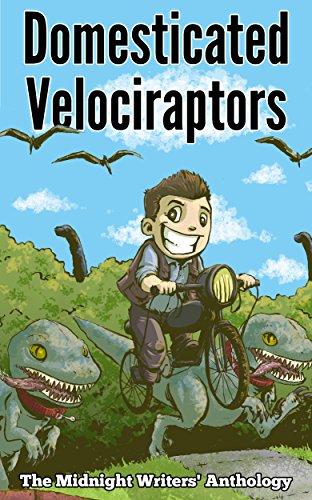 Drafield Zho and his trusty snatcher have lead many hunting expeditions into the dinosaur-haunted wilderness outside the walls of Seneria, but none have included an incognito king on its guest list, and never before has he attempted to hunt the mighty bataar.

That’s “Bataar,” a short story set in the same universe as Groom of the Tyrannosaur Queen. It’s available along with many other great stories in the Domesticated Velociraptors anthology. Here’s their blurb:

What would the world be like if you could hire Velociraptor rides for your daughter’s birthday, race them through jungles, or buy them at the local pet store? Fourteen authors from around the world delve into the prospect of domesticated Velociraptors in these stories full of adventure, wonder, and possibilities. Come explore realities where Velociraptors protect the land, take over kingdoms, and get tamed by grandmothers in the second anthology from the Midnight Writers.

This short story is an old one from back in my OPUS: Dinosaur days. It was actually the inspiration behind Groom of the Tyrannosaur Queen. Hope you like it 🙂

This entry was posted in Blog and tagged Announcement, Groom of the Tyrannosaur Queen, writing. Bookmark the permalink.